Blue Meanies are well known to contain healthy, rich amounts of psilocin, psilocybin, and are much more psychedelic then less rare/easier to grow strains such as the Golden Teacher.

The blue meanies is a mushroom well-known for its rich psilocybin content. The name comes from the trademark blue bruising that often shows up on the stems and caps. If you see some bruising like this, don’t be alarmed. More severe bruising is often an indicator of a denser psilocybin content – many experienced users will tell you the bluer it is, the stronger the trip!

If you’re looking for a mushroom that has a milder flavor, this is a great one to consider it as well. Psilocybin mushrooms aren’t generally well-known for tasting great. But many users find the flavor of the blue meanies to be much less offensive than other strains.

The History of the Blue Meanies

This Strain was first developed in the warm, tropical climate of southeastern Australia. They are exceptionally well-known to travelers and residents of Bali in Southeast Asia, where its use became more widespread and grew in an exposure. Even with Bali’s relatively strict policies around mushroom usage and distribution, their popularity has continued to climb in recent years. Its name is derived from the vivid blue bruising which appears when the fruiting body is touched. This bruising is also an indicator of its elevated concentrations of psilocybin and psilocin.

Its visual characteristics are typically medium/large fruiting bodies with thick, dense stems and a golden caramel to tan, often white speckled cap. This strain has moderate sporulation, moderate yield, and above average potency.

The high is considered to be light and euphoric, with slight visual hallucinations that will often persist even after the heavier part of the trip (also known as the peak) is done. Therefore, it produces uncontrollable laughter, euphoria, synesthesia, physical energy, visual stimulation, vibration felt throughout the body and feelings of connectedness. In brief, blue meanies are a perfect choice for beginner users. And if a more experienced user is looking to buy magic mushrooms online, they can definitely look to this strain as well.

Be the first to review “Blue Meanies” Cancel reply 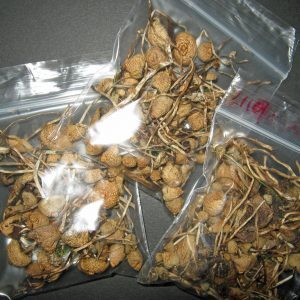